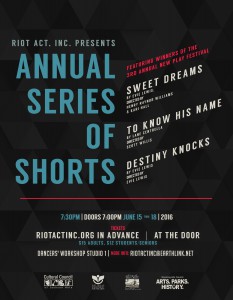 Riot Act, Inc. presents our Annual Series of Short Plays June 15-18 at 7:30pm nightly, doors at 7pm, in Dancers’ Workshop Studio 1 in the Center for the Arts.

Ready for some home-grown entertainment?  Need some comedy, drama, and fantasy?  Join us for our Annual Series of Short Plays.

Riot Act, Inc. is thrilled to present the winners of its 3rd Annual New Play Festival. Six original works were submitted for the contest and judges ultimately selected three short plays to be produced as part of Riot Act’s Annual Series of Shorts.

A whimsical look at a modern day Mab, queen of the fairies, as her magic interferes with the coworkers of a data collection agency.

To Know His Name by Lane Centrella, directed by Scott Willis

This is a serio-comedic play focusing on a family’s reflection on the loss of their patriarch.

Short plays allow the audience to see several small bites of theatre in one evening.  Please join us on the stage!  For more information, contact riotactinc@earthlink.net.