Beyond the Curtain – Chicago 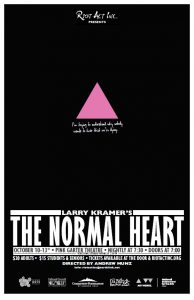 What: The Normal Heart by Larry Kramer

Tickets: $15 students/seniors or $20 adults available in advance at www.riotactinc.org or at the door

The Normal Heart by Larry Kramer:

A searing drama about public and private indifference to the AIDS plague and one man’s lonely fight to awaken the world to the crisis.   Produced to acclaim in New York, London, and Los Angeles, The Normal Heart follows Ned Weeks, a gay activist enraged at the indifference of public officials and the gay community.  While trying to save the world from itself, he confronts the personal toll of AIDS. ~Samuel French

Riot Act, Inc. T-shirts, Riot Act, Inc. Stickers and Concessions will be available at the concession stand before each performance and during intermission.  The Rose will be open and offering adult beverages.

Stay after the show for talk-back sessions after each performance.  Talk-back panels including the artists involved in the show and experts in the fields of AIDS and LGBTQ will help facilitate a dialogue about the issues of the play.

Join us for additional events leading up to the performances:

Aug. 31 – Open Rehearsal at the Town Enclosure at Center for the Arts, 6:30pm reception, 7pm start

**Parental guidance is suggested due to sexual references and adult content.**