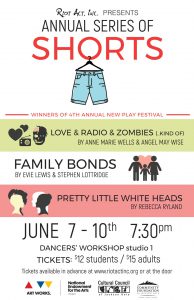 Riot Act, Inc. presents our Annual Series of Short Plays June 7-10 at 7:30pm nightly in Dancers’ Workshop Studio 1 in the Center for the Arts.

Riot Act, Inc. is thrilled to present the winners of its 4th Annual New Play Festival. Seven original works were submitted for the contest and judges ultimately selected three short plays to be produced as part of Riot Act’s Annual Series of Shorts.  The first-place winner will receive $100 and the newly created Marius P. Hanford IV Award. Marius was a longtime stage combat choreographer influential in several theater communities, including Jackson and New York. The second and third finalists will be awarded $50 each.

The play is a dark comedy about three siblings’ last visit to their family’s forest service cabin after the death of their father bringing out the worst in their family dynamics.  Featuring Patrick Nolan, Kari Hall, and Stephanie Capps.

It’s a special day, perhaps an historical day, as four young women embark on a picnic high on hill overlooking the crowd gathered below.  Through provocative dialogue they learn more about each other than they had anticipated.  Featuring Annessa Melnick, Hilary Camino, Delia Compton, and Hannah Martinelli

Brand new, re-designed Riot Act, Inc. T-shirts and Concessions will be available before each performance and during intermission.

Short plays allow the audience to taste several small bites of theatre in one evening.  Mature content, parental guidance is suggested.  Please join us on the stage!  For more information, contact riotactinc@earthlink.net.